February has arrived and while the month is usually associated with words like “leap” or “valentine” or “groundhog”, there is another word beginning to make a case for inclusion. That word is “potato”. You can thank the House of Friendship for this, as their annual February Potato Blitz has gained extreme popularity and is now over 20 years old. The Potato Blitz incorporates a variety of fundraising events, aimed to prevent those in need from going hungry.

The Blitz kicks off with the Don Cameron Potato Night at the Kitchener Rangers hockey game, also includes a Supermarket Blitz and culminates with a wonderful Community Potato Lunch. Also included in the Blitz is the #SpuddyUnselfie twitter campaign. For every #SpuddyUnselfie that gets tweeted to @HOFKW, Pfenning’s donates a 3lb bag of organic potatoes.

Some of our warehouse team!

Last year was the first year Pfenning’s sponsored the #SpuddyUnselfie campaign and it was a wonderful success. Pfenning’s will once again partner with the House of Friendship with the ambition to donate even more spuds in 2016. Last year the twitter campaign reached 56 tweets, which is a number Pfenning’s is hoping can be more than doubled in 2016.

We hope to max out our contribution this year but need your help to make that happen. All you have to do is grab some potatoes, take a selfie and tweet it to @HOFKW using the hashtag #SpuddyUnselfie. Simple right? It takes no time at all and your wonderful “selfies” can make an incredible difference by helping feed neighbours in need.

Pfenning’s enjoys helping neighbours, helping friends and helping each other by providing food security. Another way Pfenning’s does this is by allowing all employees the ability to go directly to the fields and cut any vegetables that they would like. It is just one simple way of ensuring all employees have access to healthy food. Food security issues have plagued society for quite some time, but with growing support of organizations like the House of Friendship, we as a society can help end hunger. 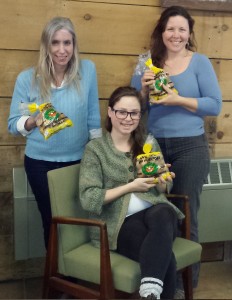 Natalie, Celia and Jenn from the office!

We sincerely hope that you take a moment to grab some spuds and take a #SpuddyUnselfie so that we at Pfenning’s can donate our potatoes to those in need. Make sure to keep an eye on the @PfOrganicFarms twitter account over the next month as Pfenning’s employees tweet their own creative #SpuddyUnselfies.